The City of Hagerstown’s Department of Parks and Engineering is taking a proactive effort to protect our beautiful parks from an invasive species called the Emerald Ash Borer.

What is the Emerald Ash Borer?
The Emerald Ash Borer (EAB) is an exotic beetle that was imported accidentally into the United States on packing material that originated in Asia. EAB larvae feeds on the inner bark of ash trees, disrupting the tree's ability to transport water and nutrients and eventually kills all untreated ash trees.. The EAB has already killed tens of millions of trees in the states where it has been detected. Other than Maryland, the beetle has been detected in 21 other states including Illinois, Indiana, Kentucky, New York, Michigan, Minnesota, Missouri, Ohio, Pennsylvania, Virginia, West Virginia, Wisconsin, Colorado, Connecticut, Georgia, Iowa, Kansas, Massachusetts, North Carolina, Tennessee, New Hampshire as well as Ontario and Quebec Canada.

Has the Emerald Ash Borer been detected in the City of Hagerstown?
YES! Parks Division personnel along with Maryland Department of Natural Resources foresters discovered the EAB in City Park and Fairgrounds Park.

Has Hagerstown done an inventory of its ash trees?
Yes – please see the table below: 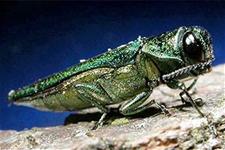 How is Hagerstown treating ash trees that are in good condition?

In City Park, ash trees that are in good condition, and are in locations that add significant aesthetic value of City Park will be treated with a highly effective insecticide called "TREE-age." Forestry crews inject TREE-age directly into the tree’s vascular system through several plugs that seal it inside the tree. The initial treatment was expected to protect the tree for a period of two years, and then it must be repeated biannually for the life of the tree.

In City Park, we completed the first treatment to 108 ash trees in April 2015.  We re-applied treatment in May 2017, and the next treatment is scheduled for April/May 2019. 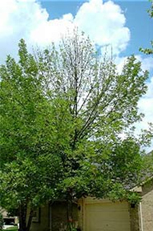 How is Hagerstown treating ash trees that are in poor condition?

Ash trees in the poorest condition, or of lower aesthetic value, are poor candidates for treatment and are most vulnerable the EAB's effects. These trees will be removed in anticipation of their infestation. Several were removed in City Park in February 2015.

Will ash trees that are removed be replaced?

Yes. We are actively planting trees in the City, far more than will be removed. All ash trees that are removed have been replaced with new tree species that are not susceptible to EAB.

What should I do if I still have questions?